Acupuncture. Its one of those things that you feel you should do when having fertility treatments, but you’re not really sure why, when in the cycle you should have it or if it does actually work.  I took the time to sift through all the research to see if it is actually worth our while.  By the way, this is a long post packed full of evidence and information.  If you are limited for time skip towards the end for a quick summary.

I remember my trip to an acupuncturist. And yes, I use the word ‘trip’, as in singular. Having decided to try and leave no stone unturned in the pursuit of a BFP I duly attended the acupuncturist which was attached to a nearby nutritionist (using the theory that if she was attached to other holistic type health people then surely I was on to a winner!). Despite looking up her qualifications, experience and interests (there was ‘women’s fertility’ listed with about 10 other ‘specialty’ areas) I was disappointed about her lack of insight into the fertility world and I definitely got the sense that she considered me to be ‘jumping on the bandwagon’ by pursuing IVF. Sitting down to discuss the treatment I told her my diagnosis, which included PCOS and she didn’t seem to think that there was a problem with the fact that ovulation was few and very far between, along with all the hormonal difficulties women with PCOS can have, and said that pregnancy was just a matter of time. When I asked about the mechanisms behind acupuncture I was told it was just about improving blood flow to the uterus and pointed at a diagram on the wall that was meant to be the explanation. I perhaps wasn’t the best acupuncturist patient and was a little anxious about the whole thing and the sensation of the needles going in was not a pleasurable one (for me anyway). But I think relaxing and discussing problems with a patient is as much part of the therapy as the therapy itself. Well, kind of. But I think the real kicker came when I was 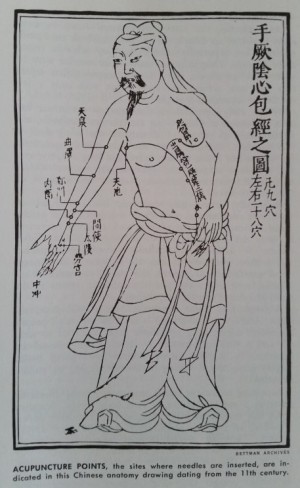 left to ‘relax’ for 20 minutes, which incidentally turned into 50 minutes, without music but with the soundtrack of the man next door discussing his bowel habits with the nutritionist! Anyway, convinced that she had forgotten about me and shouting out to attract her attention, she eventually came back and I eventually left– it was all quite bizarre. You hear a lot that the main benefit to acupuncture is taking the time to relax and distress and that’s the main way that it helps you, if that is the case it certainly didn’t help me. For those that are wondering it was a BFN that cycle by the way.

But that’s just me. I know a lot of people who have had acupuncture and rave about it. A lot of people find it relaxing and its stress relieving properties, like I said, seems to be one of its main perceived benefits in fertility treatments.  Along with its ability to ‘improve bloodflow’ that is.

So how does acupuncture work?

In its most basic form, acupuncture involves inserting a number of needles into the body at certain points, or acupoints, along meridians in the body. There are around 400 acupoints running along 20 meridians – 12 primary ones which are generally associated with internal organs, and 8 extradordinary ones. Accupuncuretoday goes on to describe that ‘qi’ flows along the meridians. Qi is described as kind of like an energy or a vibration that carries the effects of the acupuncture from one acupoint to another. When the qi flows the body is able to work properly. There are certain acupoints that must be stimulated on various meridians to treat different ailments. For example, the acupoints for treating fertility will be different to those for treating back pain. For a full list of acupoints, have a look here.

But HOW does it work for FERTILITY?

In an overview of the use of acupuncture in gynecology, Napadow et al stated that in her view, recent basic and clinical research has demonstrated that acupuncture regulates uterine and ovarian blood flow, and that the effect is most likely mediated as a reflex response via the ovarian sympathetic nerves, and that the response is controlled via the supraspinal pathways

So it seems as if my acupuncturist was correct in that acupuncture assists with blood flow. AND there seems to be some sort of medical explanation for it. Because of the increased blood flow to the uterus, it also produces a healthier uterine lining and helps with implantation (1)

Besides in just assisting with blood flow, there are a number of other ways in which it can possible help IVF and pregnancy outcomes:

So… Does It Work?

There have been quite a number of studies done on acupuncture trying to determine its use and benefit.  It seems that each study seems to say a different thing.  This is event the case for meta-anaylsis studies (where a researcher looks at all the relevant experiments that have been completed and combines it into one big summary so to speak).  One article will state that acupuncture is helpful in increasing pregnancy rates whilst another will say that it does not increase live birth rates. 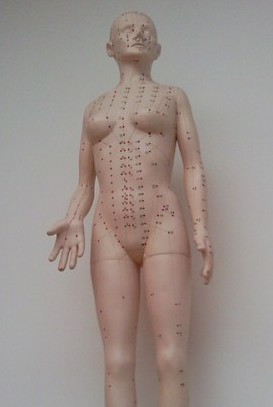 acupuncture was compared against this sham acupuncture there was no significant differences in the live birth rate; however, when acupuncture was compared against having no treatment at all there was a significant difference in the live birth rate!  This perhaps suggests that it is not the actual acupuncture and its effect on qi and manipulation of acupoints but that perhaps some placebo effect is having effect and the act of participating in the treatment is more beneficial then the actual treatment itself.

At exactly what times in these phases isn’t exactly known. Some studies had women having acupuncture at day 1 or 7 or 9 …or more! It varies a lot and seems to be at the whim of whoever designed the experiment.  Perphas if you think that acupuncture might be worth trying, and you have the time and the money to give it ago, that should be something that you can discuss with your experienced acupuncturist.

You haven’t really given me an answer here…

No, to reply to my own comment, I haven’t.  Although from what I have read, most articles seem to support the theory that acupuncture is not of any significant assistance in fertility treatments there is none the less still wide ranging views.

There are a number of reason why there is so much disparity:

Evidence is varied whether or not acupuncture in fertility works and as in many of the topics surrounding fertility more research is needed. Some say it does and some say it doesn’t have any impact on pregnancy rates and increasing the chances of you getting your ‘take home baby’.  If you do happen to have the time and the money there does not appear to be any harm done so is perhaps worth a try – even if it is just to get some ‘stress relief’ or benefit from a placebo effect.

If you do decide to that acupuncture is for you, remember that some of the evidence suggests that there is only benefit if done throughout the cycle and not just as a one off, tick the box kind of activity. Unfortunately, there is no set regime for these what days to get acupuncture and you would need to find a reputable acupuncturist specialising in fertility to help you form a treatment plan.  Put the effort into finding an acupuncturist who understands the unique challenges that fertility patients face, the various medical conditions that cause fertility and is willing to take the time to tailor your treatment for you.

1. Cochrane, S., Smith, C., Possamai-Inesedy, A. & Bensoussan, A. 2014. Acupuncture and women’s health: an overview of the role of acupuncture and its clinical management in women’s reproductive health. International Journal of Women’s 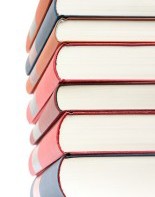